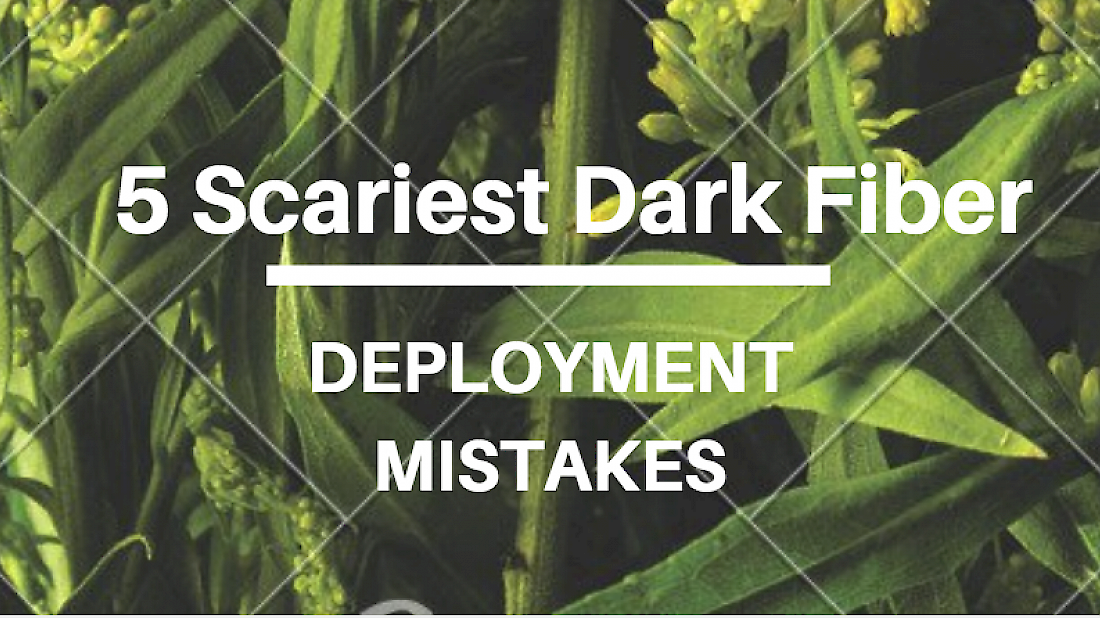 Dark fiber is known to provide bandwidth scalability, flexibility, security, and of course network control. At Vertex Innovations, we’ve seen a rise in dark fiber projects for our partners who need help managing the growth and evolution of their networks, from improving current backhaul to deploying new small cell and C-RAN technologies.

In a fast-growing market that continues to present plenty of opportunity, there are equally as many errors that network operators should try to mitigate. We’ve asked one of Vertex’s resident dark fiber experts, Jeramie Trotter, to weigh in.

Here are the top 5 scariest mistakes that project owners should be aware of:

Mistake #5: Leaving Your Standards to Chance

A testing standard is necessary in order to meet performance requirements. For example, if you want 10 Gig bandwidth, testing standards must pass 10 Gig service, or it won’t perform as expected. Within the fiber industry, fiber splicing and fiber networks are currently unregulated. An example of a regulated service is electrical: Legally, a home or building must be wired by a licensed electrician, based upon electrical standards and the property is inspected. This type of regulation is not found within the fiber industry, however companies are able to create and enforce their own testing standards.

Real-Life Horror Story:
A large internet service provider (ISP), with very strict testing and splicing standards, had a fiber splicing project. The ISP left it up to the contractor’s sales engineer to share these standards with his team. The individual failed to communicate, and this information never reached the field technicians. Tests conducted were not in compliance with the standards, and the ISP had to wait for the contractor to remobilize their splicing crew to retest. Had the customer either enforced their standards themselves or selected a vendor who prioritizes compliance over closing deals, they would have saved significant amounts of time and money.

With dark fiber projects, as sites come out of real-estate and notice to proceed is given, contractors may find themselves inundated with work. Multiple sites may simultaneously require pre-construction meetings, permit applications and site access scheduling.

Real-Life Horror Story:
An outside contractor had actually taken on too large of a work load to manage, but led the project owner to believe everything was A-OK. In an attempt to continue making progress toward completing all of the jobs, the contractor began picking and choosing which pre-con tasks would be completed for each job (rather than completing all of them as should have been done).

At one project site in a dense metro area, a pre-con meeting was missed by the sub. As a result, the sub misunderstood the scope; his team placed the fiber in the wrong conduit and ran it to the wrong building. The impacts of the sub’s error were significant. The project owners had to reapply for new permits, explain the contractor’s mistake to the regional directors and lose about $10,000 on the extra work.

The pre-bid site walk is crucial. It offers the customer a high level understanding of what will be involved with the build, as well as costs. It also generates a more competitive bid process. The pre-bid site walk gives subcontractors the ability to create bid estimates based on their knowledge of what the job will require. Often without a pre-bid site walk, the scope of work is interpreted differently by subs, resulting in returned bids that are not comparable.

Real-Life Horror Story:
The program owner did not want to bother with a pre-bid site walk for one of its most complex project sites. At this site, all of the underground utilities and existing fiber at the site was out of its original easement, which meant the sub-contractor would have to bore a new line.

As a result of skipping the pre-bid site walk, the proposals received were inconsistent and didn’t accurately reflect the job scope. The sub-contractor who won the project had to submit a rather large change order from the beginning in order to relocate the utilities and fiber. We were able to come in and negotiate with the LL to gain new easement, but a job that should have taken one week turned into an almost a two-month ordeal.

Mistake #2: Underestimating the Value of the Landlord

For a site acquisition (Site Acq) vendor, the relationship with the building’s landlord (LL) is key. This individual sets rules that govern the private property. It is critical for Site Acq to communicate any and all requests to the LL, and to ensure those requests are understood and agreed upon. An uninformed LL can shut a job down, placing overall completion in jeopardy and driving up costs. This relationship is just as important as the one between Site Acq and the governing municipality.

Real-Life Horror Story:
The project team had received the official “Notice to Proceed” for a cell site, so they scheduled the boring contractor and were ready to begin work the next day. Just before they were about to get started, the property management shut them down. It turns out that Site Acq never notified the LL. We were able to step in, bring the LL up to speed, walk through the scope and provide COI, but this mistake still caused a two-week delay.

Site drawings identify where to place fiber and at what depth, on the designated side of the building and through the correct rooms. The drawings also clarify specific locations within the building for fiber placement. Typically, these documents are reviewed by the engineering firm, the construction engineer, the landlord and the customer to be sure everyone is agreement on placement.

Real-Life Horror Story:
The site drawings had been emailed but never reviewed or followed up on. The project owner was under the impression that a site called for new conduit and a riser to be built outside the building. It was not until after the construction phase had begun that the team realized that a simple wye intercept would have provided access into existing conduit.

If the team had taken the time to review the drawings, the customer could have saved anywhere between $20,000-30,000 at this site by eliminating the unnecessary commitments.

Each of these mistakes can be avoided by holding vendors and employees alike accountable. Use the tools and management methods that increase productivity, boost morale and keep teams on-task. Prioritize standards and leverage the unique skills available to you, such as value engineering, design validation, and change control. If your team has an upcoming program or project that could benefit from subject matter expertise, contact Vertex today.

Feb 12, 2018 — ColoGuard to Provide Tenants with Ready Access to More Than 30 Networks As lack of choice for connectivity... Learn More